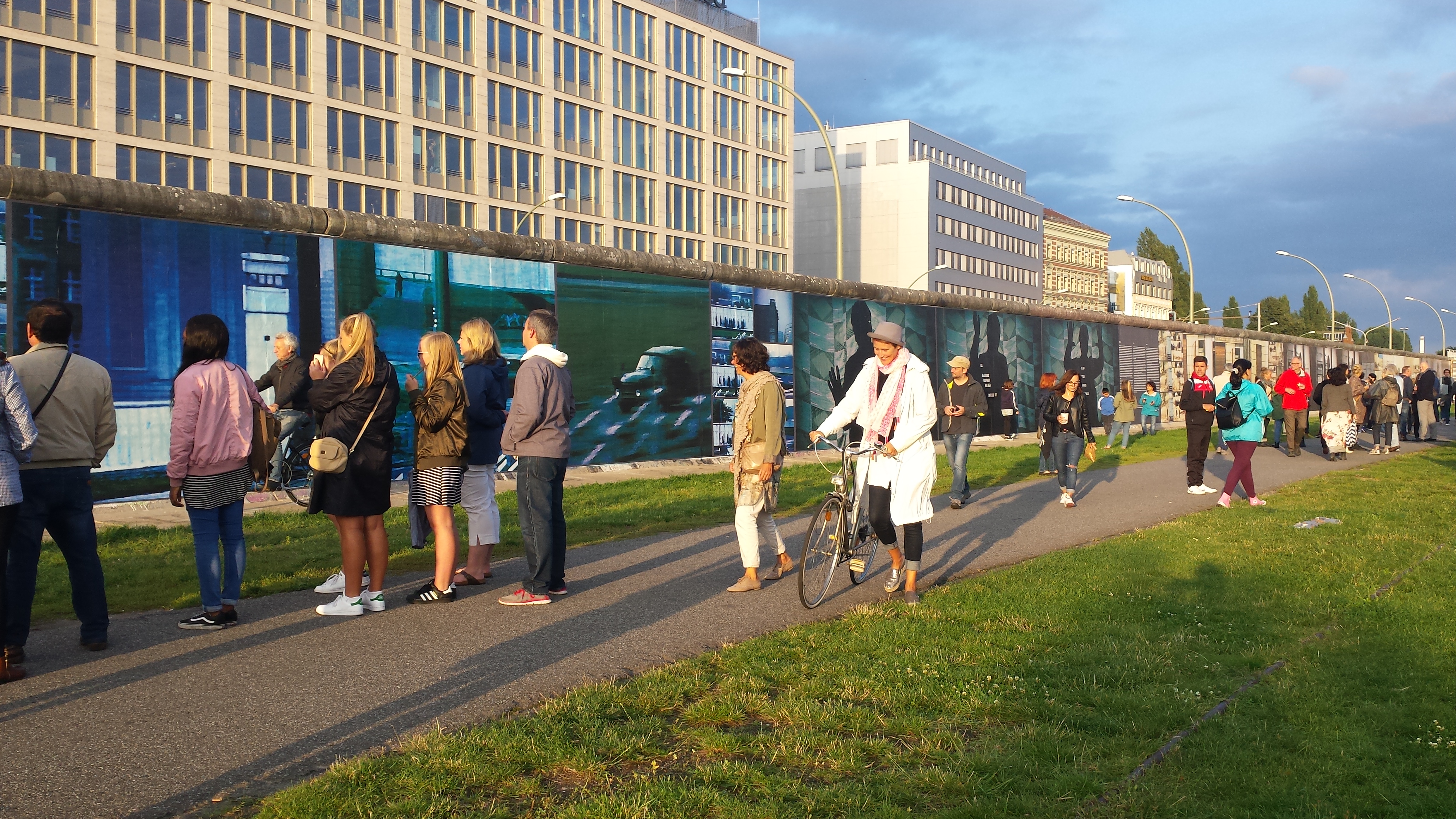 Using the biggest, still preserved piece of the Berlin Wall, the 2017 open-air installation Beyond the Wall stretched alongside the back of the East Side Gallery, located at Mühlenstraße in Berlin-Friedrichshain. On the flip side of what forms one of Berlin’s main tourist attraction and background for innumerable selfies, Stefan Roloff’s project re-situates spectators into the anxieties associated with the Wall during the Cold War era, when it separated the sovereign territories of the GDR and FRG. An exhibition that was supported by the society “Kunst darf alles” and the Kulturprojekte Berlin Ltd., Beyond the Wall was symbolically framed by two dates that marked the beginning and end of the Wall’s political existence. The installation opened on 13 August, when in 1961 the East German sector became physically sealed off; and ran until 9 November; when in 1989 events occurred that are referred to as Fall of the Wall, one of the key historical events of the twentieth century.

Beyond the Wall integrates materials that Roloff, a German-American painter, photographer and filmmaker, collected since the early 1980s. Roloff, whose interests as an artist concern Germany’s political past linked to the Holocaust and the Cold War, uses documentary film, photography, video installations and painting as artistic incursions into his subjects. Born in West-Berlin and grown up in a city that was surrounded by a cement wall, he was one of the artists who dared to decorate the wall with graffiti when this was considered a transgressive, disrespectful act. In the early 1980s, at the time living and working in New York, Roloff came back for a spontaneous visit to Berlin with the plan to film „life at the Todesstreifen (death strip), this absurd, kafkaesque world, where people sat waiting to kill other people.” His footage, taken at former checkpoints such as Oberbaumbrücke and Bernauer Straße, documents the intimidating presence of this zone as a heavily guarded area, complete with searchlights, dogs, and electrical fencing. Some of the images catch daily activities of GDR border patrol officers, who seemed to be bored and lethargic. Roloff had no idea what to do with this material, not knowing that the wall would lose its political significance in a few years’ time, and that one day, he would project this material in this same spot.* In 2007, the visual artist made video portraits of former GDR citizens whose lives were marked by the wall and who tried to escape the GDR. Roloff interviewed more than seventy people, among them Mario Röllig, who had been caught in an escape attempt at the border between Austria and Hungary, and civil rights activists Ulrike Poppe and Birgit Willschütz, who were imprisoned because of oppositional activities. These reports are aesthetically stunning, showing the interviewees as silhouettes.**

Stills selected from the video portraits, citations from the reports and video stills of the Todesstreifen footage formed part of the 2017 installation, Beyond the Wall. In order to make grainy video stills he had filmed with a VHS camera, fit the proportions of the three-meter-high wall, Roloff developed a technique that transformed them into paintings. The 229-meter-long strip consisting of text, stills and silhouettes evoked a space that spectators could almost walk into. The images invited them to peek into a territory that was forbidden to enter, exposing passers-by to the scrutinizing look and bodily presence of patrolling officers.

While today the remains of the wall and the surrounding area appear as apolitical, harmless space, this project evoked the Berlin Wall as a daily experience and part of Berlin’s urban landscape. More than 200,000 visitors came to see Beyond the Wall that ended with a symbolic finale. On 9 November 2017, Roloff projected a documentary about the democratic movement in 1989, over the image of a GDR border patrol officer. The people whose portraits formed part of Roloff’s exhibition, among them Mario Röllig, lighted five hundred candles – a symbol of peaceful protests in autumn of 1989. The installation was critically acclaimed nationally and internationally.***

Roloff’s installation is a reminder of the Berlin wall as a desperate attempt of preventing East Germans from walking out of the socialist state – and a human experiment that claimed the lives of hundreds of victims. While commemorating German historical events, this exhibition was a timely affair. In our current world, marked by a climate of political confrontation, civil wars and mass migration, once again plans about the building of walls are becoming more concrete, reflecting anxieties of the Western world over their resources. Solutions need to be found to alleviate human suffering instead of locking people in or not.

* In 2005, this material was used as a first prototype in an installation at the Villa Schöningen in Potsdam: http://when6is9.de/installations-and-projects/1plus1/

*** More information and additional photos can be found here: http://www.dw.com/de/west-side-gallery-kunstinstallation-zeigt-einblicke-in-den-todesstreifen/a-40062300